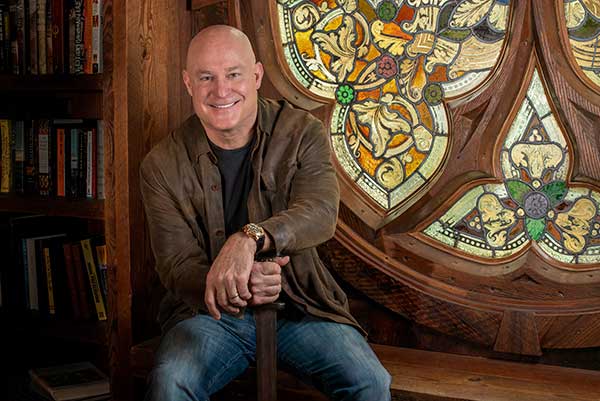 Douglas Charles Smith grew up as the quiet one, buried in books he loved, adventure stories that took him to other times and places and featured a hero who stood tall against evil, natural or otherwise.

He had a career growing businesses, starting with a degree in electrical engineering from Oklahoma State University and a master in economics from Texas Christian University. DC combines that with a lifelong passion for physics and philosophy. He spent decades building wireless technology companies as the cellular industry boomed and changed our lives. During that period, he expressed his creative passion by sculpting figurative pieces in marble. He is told his sculpture brings to mind Rodin. Later, those passions transitioned to writing, and he joined various metro Washington writers’ groups to further his craft.

The Apocalypse Game (TAG) book series began with stories told to his children. They suggested he turn the story into a book. He agreed that was a fine idea without understanding the length of the journey to which he committed.

In 2015, DC moved to North Carolina to write TAG full time, meaning six days a week, because he felt world events would soon create a large market for this story. Sadly, those events have developed as he feared as DC wrote innumerable drafts, fine tuning his writing craft and producing the first four novels of The Apocalypse Game book series, brought to the literary industry now for the first time.

So, why this story? The multitude of refugees, the massive wildfires, the growing volcanism, the oceans polluted with plastics, global warming, endless wars and rumors of war, and the mutating plagues that hover over our families and homes, our endless greed and indifference. We all know, we all do little or nothing, we all wait. And in this kind of atmosphere comes the first novel, The Book of Jonas, revealing that the current calamities are just manifestations of the ancient battle between light and darkness. So, are you afraid? Well, be afraid. Things will get much worse.

My first goal with TAG is to entertain. But also, I encourage the reader to consider the consequences of life’s most important choices while there is still time.